There are extraordinary substances, which propagate or outright cause the healing of the body. Neither of them are synthetic. In my 40 years of professional medical experience such substances are only found in nature, or derived from natural substances. This means, they are impossible to duplicate synthetically. Yes, most of them can be put together in a factory, but they will never have the same potency as those, harvested from nature. Every substance has many variations. These are called isomers.

When I read the book of good Dr. Schüssler, I was all on fire, because it was comprehensible, logical, and had a great promise. By now, his theory has proven itself beyond any doubt. It was some 5 years ago, that I cremated the first good looking young pig. I was truly sorry for it, but explained it away with the rock solid argument of it definitely ending up on the table of someone sooner than later. Unfortunately we live on a planet where our creators and the creators of our biosphere introduced the idea of the food chain. That is what we have here. One eats the other. He is compelled to do that, otherwise he will soon be dead as a door-nail. With that I absolved myself, and terminated my budding guilt complex.

It was about four years ago, that my phone rang at three in the morning which upset me so badly that I answered it, like I had done many hundred times before that. At the other end there was gorgeous Christina, in a definitive nervous state of mind. Her Mom wanted to get out of bed to go to the toilet, but this effort resulted in a broken thigh. She begged me to instantly do some magic, because this is bad. I gave her a magic spell, which is the phone number of the ambulance services.

The next day in a somewhat calmer state of mind she called me again, and said – the fracture occurred because the thigh bone has a tumor. In the early hours of the morning she had her op, received a hip implant. The op was successful, but as another surprise, the doctors revealed a breast cancer as well. She made a photo of it, and again asked for some magic.

This, ladies and gentlemen is a breast cancer in it’s fully developed state and beyond. Absolutely inoperable, because she would bleed to death on the operating table. In this state, the only advice is to wait for the evident and sad finale. I have no idea how Mom managed to hide it, but nobody knew about it. The biggest mystery for me is, how can such a stinking condition be kept a secret. And further, I do not understand why it had to be kept a secret.

What on earth can be done with such a mess? The medical profession says – absolutely nothing. The natural healer fled. The others are swinging their faces from left to right, and their expressions say a lot. Yes, prayers can be said, but this old lady and her daughter are hardly good at that. However I had to do something, because I was asked to. The only “something” that came to mind were the Schüssler salts. That same day I had a month’s dose posted to Christina. And then every month I sent another dose. She never received any treatment from anyone. The months were going by. Usually every month I spoke with Christina on the phone. She tentatively started saying, that Mom seems to be doing better. Her breast is as if it was healing, but it still emits a horrible stench, although the oozing is definitely less. It took about a year, until she lost the stench. Before the op on the thigh, the prognosis was a month at most. The prognosis was based on the fact, that such a developed tumor is actually rotting tissue. It can be thought of, as a slow sepsis of the body. For a while the body survives, but then the white flag goes up. 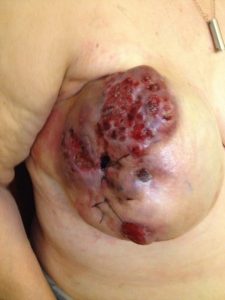 On these pictures the healing already shows, but the road is long yet. 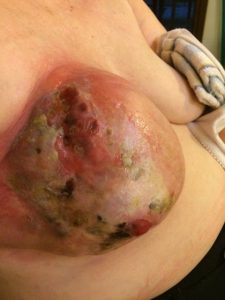 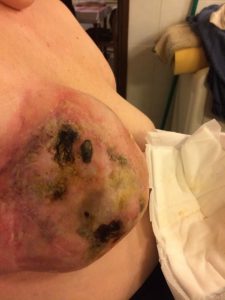 Here we are three years down the line. The dressing has to be changed every three days. 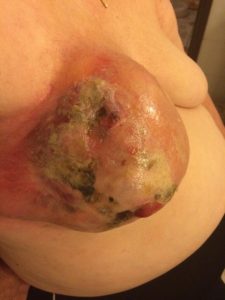 Mom is doing the garden, does the household chores, and generally is in a good mood. 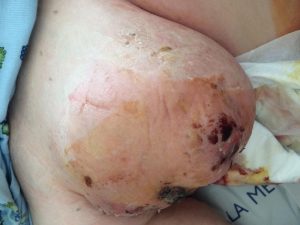 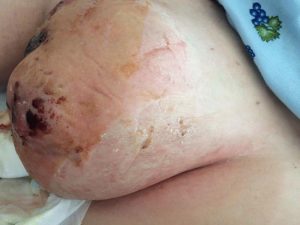 The healing is uninterrupted as the annual tax reports. Every six months she gets a PET scan or an MRI. She has no metastases, those that were found in the lungs at the start, have dissolved. Every medical report ends with the phrase “status idem”. This means, the state of the lesion is unchanged. This I do not understand, because I do see improvement.

This is how it looks now, Mom is shining. Other than the dressing of the breast, there was no intervention whatsoever. This report was chosen, because here it is evident, that nobody messed with it other than myself, and no other substances either.

The human body and mind is an organic whole. What we see on the surface, is precisely what goes on in the deep. Here, and in every other case, the whole body heals. Slowly but surely. A body of an eighty year old is not in a rush. The blood works are fantastic, and it interests me the least, because I see what is going on, on the surface. I am old school. I touch, listen, knock, smell, and ask questions. Whoever learns that and has a solid practice of the art, sees into the body, and through it straight. Unfortunately this is not taught at the university anymore.

Almost everyone asks the question: “What are these Schüssler Salts good for?” Well, for that.

They bring about a very peculiar and delicate mineral balance, and as long this balance is maintained, the body heals. The peculiarity of the mineral balance cannot be done otherwise to my knowledge. The mineral mixture with it’s exact proportions to one-another of a young and healthy pig are a mixture, that cannot be duplicated in a lab. Maybe a couple thousand years from now. Maybe. Now we have no other choice if we want the real thing. And every sickness heals. Slowly, but it happens. If one stops taking it, the body halts it’s healing process. The first one or two months after stopping it, not much is felt, but in that span of time the quantity of stored minerals get depleted. I am an unusual type of a family doctor. I do not teach at the medical school, and never will. I learned to communicate in a way that the patient in need of help understands. Since I am talking to him/her. I have also learned, that I have to repeat many times the same to the patients, because they learn slowly. This I loathe, but that is the profession.

Now I will say it again. The Schüssler Salts are for every health conscious person from the age of 30. No stopping them. It is advised to have the experience of stopping them after a few months. After three months tops, the effect erodes, and we have the same old pains and ills to suffer. In case of starting on them again, after a month or two we have that delicate and peculiar balance built, and the pains and ills subside.

That is all I can say. Beyond this point, there is the personal experience of the ailing person, or can be.

This website uses cookies to improve your experience while you navigate through the website. Out of these, the cookies that are categorized as necessary are stored on your browser as they are essential for the working of basic functionalities of the website. We also use third-party cookies that help us analyze and understand how you use this website. These cookies will be stored in your browser only with your consent. You also have the option to opt-out of these cookies. But opting out of some of these cookies may affect your browsing experience.
Necessary Always Enabled
Necessary cookies are absolutely essential for the website to function properly. This category only includes cookies that ensures basic functionalities and security features of the website. These cookies do not store any personal information.
Non-necessary
Any cookies that may not be particularly necessary for the website to function and is used specifically to collect user personal data via analytics, ads, other embedded contents are termed as non-necessary cookies. It is mandatory to procure user consent prior to running these cookies on your website.
SAVE & ACCEPT
×
×